On November 28th 2011. The University of Birmingham Lodge 5628 celebrated its 75th birthday and 300th meeting by raising two of its members in a double ceremony. Bro Jake Harvey and Bro Dipesh Bhundia had entered Freemasonry though the Universities Scheme being initiated into the University of Birmingham Lodge. The Lodge benefited from the assistance provided by the Provincial support team who supplied assistant deacons for the evening. Jake Harvey is a Lewis and his father W.Bro Ade Harvey, a member of Chase Lodge in the neighbouring Province of Staffordshire, assisted W.Bro. Ron Parker, the new Master of the University of Birmingham lodge, by raising his son Jake. The evening was further complemented by members of Foundation Lodge, No. 82 in the Province of Gloucestershire, who presented some elegant regalia and jewels that had belonged to a deceased brother who had also been a joining member of the Lodge. The provinces of Warwickshire, Staffordshire, Worcestershire and Gloucestershire were all well represented. 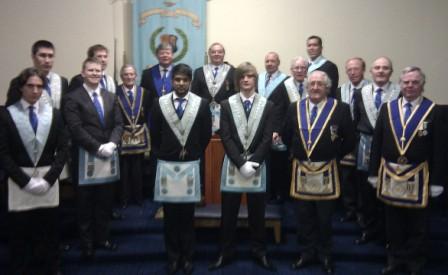