The University of Birmingham Lodge was the second to join the ever increasing ranks of the University Scheme initiated by the Assistant Grand Master David Williamson, the first being Apollo Lodge of the University of Oxford. This is rather fitting since Apollo is one of our Mother lodges from whom so much of our ritual was inherited.
The Master of our lodge, W. Bro Ron Parker, accompanied by our hard working secretary, W. Bro Clive Neal-Sturgess, attended a conference at Freemasons Hall, Great Queen St, London on Saturday October 15th specifically to discuss the progress and possible improvements of the scheme. Most the 40 or more participating lodges were represented.
We were personally greeted well as representatives of our lodge by the Assistant Grand Master R.W.Bro David Williamson and co-ordinators of the scheme, including W. Bro Stephen Tucker. Their comments about how well we were performing in our role were taken kindly.
Right W. Bro David Williamson and W. Bro Stephen Tucker introduced us to the Grand Secretary, W.Bro Nigel Brown after his introductory speech to the delegates and we took the opportunity to have a photographic record made whilst standing in front of the Grand Master’s Chair on the dais of Grand Lodge! 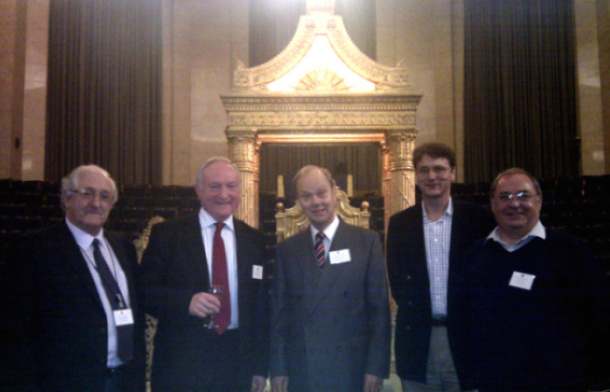